The robot trainer: Bringing man and machine together

"The complexity of human behavior, how quickly we make decisions, and the fact that we have a very real fear of machines" - That’s how Tengai’s Chief Product Officer, Sinisa Strbac, sums up his top takeaways from the project so far. Meet the man who is leading Tengai's drive to train the world’s first-ever unbiased social interview robot.

From vision to reality

We all have our preconceived ideas about robots. We unwittingly absorb these ideas from Hollywood films and the toys we played with as children. As well as our experiences with automated solutions that perform routine tasks at our workplaces. Still, making the leap from simpler machines to creating a robot that can flash you an acknowledging smile, follow your gaze, and display emotions—something that we humans have had a monopoly on until now—is revolutionary, to say the least. Not to mention a little surreal, too.

In August 2018, this surreal idea has gradually become a reality as the Tengai Unbiased team gets better acquainted with Furhat Robotics’ social robot. The project’s day-to-day progress is guided by Sinisa Strbac, Chief Product Officer, at Tengai. In addition to heading up the Tengai project, Strbac was also a senior recruitment consultant and team leader for a talent acquisition team at TNG in 2018. With 15 years of experience in the recruiting industry behind him, he is far from a newcomer to the field. Nevertheless, the Tengai project has presented Strbac with a whole new type of challenge:

“My colleagues and I find it super-exciting both to have the opportunity to play around with, and also work on developing the robot to be able to hold an in-depth conversation. A dialog in which the robot asks questions, the person being interviewed answers, and the robot then decides for itself which follow-up question is most relevant." 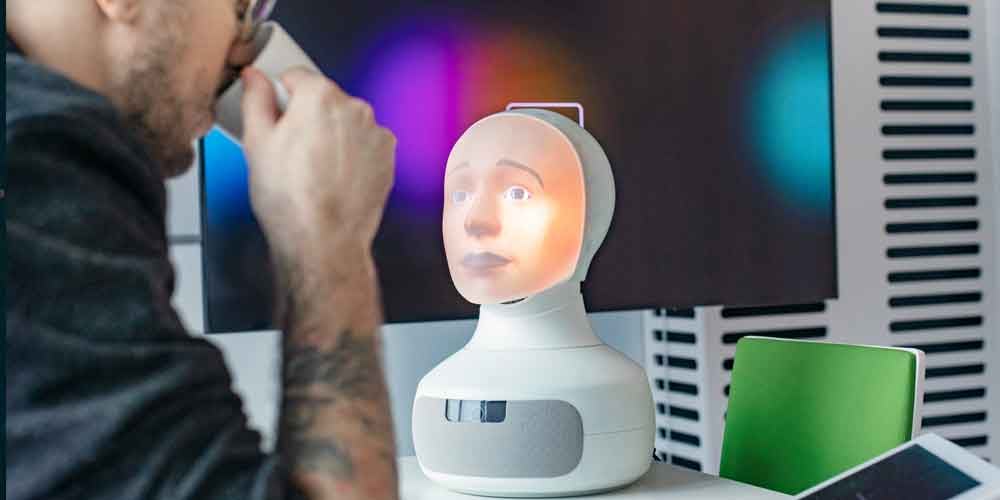 It was clear from early on in the project that building the world’s first-ever unbiased social robot was going to pose a major challenge. Strbac draws a parallel between Tengai and Apple’s famous virtual assistant, Siri, to illustrate the difficulty. He says:

“In Siri’s case, the human user asks a question, and Siri searches out the relevant information and presents it to them in a fun and social way. At the moment, anyway, it feels like Siri must be easier to program than Tengai. Our task is considerably more complex. In our case, we need to transfer learned human behavior to a robot. A robot that has zero previous experience of human social interaction. As a result, we’ve had to completely reset our own thinking.”

“Those of us who’ve worked in recruiting for decades and who think we know the job inside out have been given cause for reflection and reevaluation. Above all, we’ve had to make sure that we don’t bring our preconceived ideas and biases into the project with us.”

A road paved with challenges

The main challenge lies first and foremost in teaching the robot to evaluate a person’s answer and to understand which question should naturally follow. Tengai asks questions about a candidate’s skills and competencies based on a verified competency framework from which our recruiters draw questions and answers. Still, a competency-based question always yields an answer with no set pattern, adding yet another level of complexity to the challenge. Strbac explains:

“A talent’s response can describe any imaginable situation, be recounted in a host of different ways and in their own individual choice of words. The robot needs to comprehend and analyze this information and then determine which follow-up question would be most relevant.”

In the long run, the greatest challenge will come in training the robot to evaluate and validate candidates’ answers against a competency framework. The ability to evaluate key competencies and skills is a critical part of the project. Therefore, the Tengai team will enlist the expertise of data validity scientists working in the fields of psychometrics and behavioral science to make sure to get it right. Ultimately, the aim is for the robot to objectively be able to determine whether a candidate has a low, medium, or high level of a certain qualification that is important in the position for which they are being interviewed.

More about Tengai's framework and scoring >

Programming Tengai is a challenging task. But the physical encounter between man and machine has also given rise to challenges of its own. An issue of which Strbac and his team are well aware:

“We’re asking our candidates to put themselves in a highly unusual situation. That is, to sit in a room with only a robot as a company and hold a conversation. To be asked a question, answer it to the best of their ability, and then move on”

The reactions vary from person to person, Strbac explains:

“Some people are skeptical, to begin with, but are surprised by how naturally Tengai handles itself in a conversation. Others maintain their skepticism even after their interview. Often since they have high expectations concerning a robot’s ability to mimic human mannerisms and speak naturally. Which Tengai can’t do perfectly just yet, even if it’s well on its way. It’s social, but not in the same way as a human.”

According to Strbac, Tengai becomes a natural part of the interview:

“Then you have others who are positive towards the concept, but who get nervous prior to the actual interview. After all, we ask them to ‘perform’ in front of a machine that follows their movements. And also records their answers. There’s nothing strange about it, really; humans do the same thing. But the feeling is that the robot is much more than a human. ‘It literally records my responses!’ is the comment they make.”

“Most people are surprised by just how natural the discussion is. The longer the interview lasts, the less they think about the fact that they’re talking with a robot. It becomes just another part of the interview”

In other words, Tengai might be social and acknowledges its human counterpart during interviews. However, some people can’t help but feel a little like they are under surveillance. And so become overly self-conscious. At the end of the day, they are sitting there holding a complex conversation with a computer. A computer that will ultimately have real-life implications.

In 2020, the Corona pandemic changed recruitment, hiring went virtual and the need for remote video interviews exploded. To meet the increased market demand for conversational AI and remote interviews, Tengai launch a digital AI interview in 2021. With the new release, recruiters around the world can sit back and relax, while candidates perform the interviews. Hiring managers can then access unbiased interview data. Tengai's AI Interview increases efficiency and quality and gives candidates an interactive, fun, and engaging experience over their smartphones. There was also an increased discussion around bias appearing in one and two-way video interviews. Unlike pre-recorded video interviews, the Tengai interview gives the candidate a unique two-way interactive experience with conversational AI in real-time, while collecting behavioral data for objective evaluation. The framework, which was the same as for the physical robot, was validated by psychometric scientists in 2020 and is part of the overall unbiased methodology.

“The digital Tengai interview has been on the drawing table since the very beginning, but due to the Corona pandemic, we made a rapid change in priorities to go with the current market need. Today we are truly happy to announce that the Tengai interview is digital and ready for the market to help companies automate their interviews, without losing either candidate experience or quality in the process,” concludes Sinisa Strbac.

To find out more about Tengai, please get in touch >

More and more people are intrigued by our social and unbiased interview robot Tengai. And we’re getting a bunch of quest...

What to expect from an AI interview

What to expect from an AI interview

We are getting a lot of questions about how an AI interview actually works and some are wondering if it’s awkward. Here ...

HR-Specialists Chad and Cheese on Tengai: “This Is the future!”

HR-Specialists Chad and Cheese on Tengai: “This Is the future!”

We traveled to Torekov Hotell in Sweden and joining us all the way from the USA was the podcast duo and HR specialists C...